Although the serious business of the British Chess Championships is, of course, the competitive chess, the additional activities and social aspects are important to the overall enjoyment of the event for players and their families.  One of the well established features of the Championships is the organisation of a cricket match on the middle Sunday between an ECF eleven and a local team: on this occasion Old Edwardians’ third eleven made the journey to the University of Warwick to provide the opposition for the ECF team captained by Andrew Martin, which was pulled together despite the competing attraction of the Blitz Championship taking place on the same afternoon. 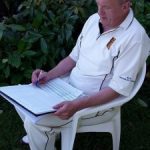 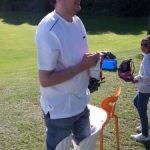 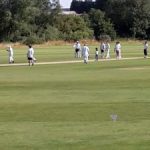 The visitors batted first and set a challenging target by scoring 254 for 7 in 37 overs: the highlight in this innings for the ECF was the bowling of Martin Simons who achieved the excellent figures of 4 for 31.

Home Chess Director Alex Holowczak is perhaps better known as an umpire than as a batsman, but when the ECF innings got underway he played very solidly at one end to score 28 (one of the unanswered questions of the day was whether this the highest score ever made in this fixture by a serving ECF Director), but wickets fell regularly at the other end and despite a quickfire 22 by Andrew Martin, the ECF were always well behind the required run rate.  Lower order resistance was led by Damian McCarthy, who found the boundary with some regularity and was unlucky to fall a couple of runs short of what would have been a well deserved 50, but with the final pair of Don Mason (batting with a runner) and John Philpott (perhaps the oldest player to feature in this fixture) and the required rate up to 18 an over, the match began to look a hopeless case even to diehard supporters, and so it proved as the ECF were eventually all out for 127.

A thoroughly good time was had by all.  Many thanks to Old Edwardians for playing and for the friendly and sporting manner in which the afternoon was conducted.