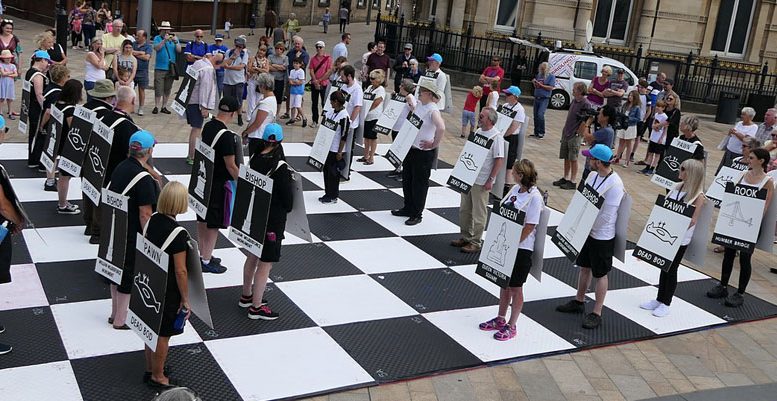 ‘Welcome to Hull – I’m the devil, but you can call me Toby if you like’

We’ve all been at infernal British Championships over the years. Who can forget the delicate delights of the outside toilets in Sunderland in ’66, the broom cupboard analysis room in Clacton in ’74 or the embarrassing spectacle of chess players letting it all hang out on Brighton’s nudist beach in 1980? As Rowan Atkinson might have said in his ‘Devil’ standup sketch: “Mobile phone offenders, time-trouble addicts, crisp packet rustlers, J’adoube artists, blitz flaggers – over there, please. Next to the arbiters and the Berlin Defence players.”

Oldies and Younglings
Hull, unlike the Other Place, was actually a Heavenly place to spend nine days – particularly if you were a real ale drinker and pub gastronome. In contrast to the all-too-samey pub/restaurant chain experience of most English cities, the oldie worldie pubs of the Old Town were a way-too-tempting sin to avoid, at least for many of the players I observed quaffing pints of Old Peculier in Ye Olde White Harte’s courtyard, scoffing fish ‘n’ chips and Atomic Power ale in the Lion & Key and wolfing down pork pies ‘n’ Old Rosie cider in the unacceptably named Ye Olde Black Boy. I don’t know if you noticed Hull’s certain ‘old’ theme, but the city’s a kind of ‘Westworld’ theme park to the demographically-challenged chess community (all we need now is to cater for young families, and we’ve cracked it…)

The city centre nightlife was also a sight to behold, with hundreds of younglings out in force both weekends, and some nights it appeared half of Yorkshire was staggering around the cobbled streets on a Stag/Hen night out.

It’s all about the holiday experience, of course, and this is something that the British seem to be rediscovering. Thanks to the sterling efforts of Stephen Greep and the Hull & District Chess Association, the week was chock full of social activities: a Ghost Walk, local history tour (Fun Hull Fact No. 37: The English Civil War started in this pub at last orders…), Grandmaster Ale chess and casino nights, a Live Chess game on the square outside the City Hall, and pizza-making for the kids at a local Italian restaurant – all great steps in the right direction. A family-friendly holiday with top class chess and fun blitz events, plus a real chess festival atmosphere are definitely the way forward, and I’m happy to say the ECF has plans afoot to develop these fun social events even more over the next couple of years.

Sartorial style and a quick dash
On to the chess itself, which was impressively run by indefatigable tournament director Kevin Staveley and his professional team of arbiters. The City Hall was grand in that northern civic pride way, even if the cavernous commentary room wasn’t quite suited to its purpose. The main playing hall was majestic but rather hot, and playing was ‘damnation without relief’ if you had less than 10 minutes on your clock, due to the long walk (mad dash?) to the toilets at the other end of the building.

My personal playing experience was brightened by the colourful appearance of International Master Jack Rudd on the board next to me. He was wearing a rather fetching, summery dress on several days. The beach attire even gave way to a stylish evening gown on cooler days, prompting IM Lawrence Trent to speculate on his chances of following suit next year (his musing, ‘If I self-identify as a woman, can I win the Women’s Championship?’ only seemed to be partly in jest.)

‘Strongest British ever’
Thanks to generous financial support from sponsor Capital Developments Waterloo Ltd and the City of Hull, the Battle for the British itself was intense, with top GMs Mickey Adams, David Howell, Gawain Jones and Luke McShane duking it out royally over the 9 rounds (I can’t recall a single short draw in the entire tournament, except for when IM David Eggleston halved out in the last round v Keith Arkell to bag a third GM norm). The last round especially was full of high drama, with Luke McShane’s brilliant queen sac finish to force mate v David Howell taking him into a playoff with Mickey Adams.

After his coolly played playoff victory, I was pleased to see Mickey’s comment, made in his speech of thanks at the prizegiving, where he graciously complimented the other players on the ‘strongest British Championships ever.’ (Even the curmudgeonly Twitter account of the still-dead 19th century English ‘World Champion’ @HowardStaunton would be forced to agree, I feel, notwithstanding his own Simpson’s in the Strand exploits and Amos Burn’s victories in the 1880s).

As a North Easterner I was particularly proud of ‘Eggy’s’ GM norm performance and Danny Gormally’s last-round draw with Mickey Adams. I should also mention the amazing performance by my Forest Hall clubmate, 10-year-old Yichen Han, who won 2 British junior titles (Under 11 and Under 12). For good measure, he also finished 2nd= in the U2050 and 5th= in the Rapidplay, notching up an impressive total of 21 points from 24 games in 9 days.

Gingering it up
For those of us who had to leave before the playoff, the live online commentary provided independently by GM Simon Williams on Twitch was fantastic (you can subscribe at https://www.twitch.tv/gingergm), particularly when he hooked up with a room full of Fiona Steil-Antoni, Keith Arkell, Danny Gormally and David Eggleston for some on-the-spot hilarity from Hull). Hint to future British Championships’ organisers: I would heartily recommend the Ginger GM commentary, bursting as it is with down-to-earth analysis for the average player and a wonderful sense of fun.

So, another British is over, and we of course look forward to next year, when it may be back to Brighton, according to the whispers I hear. Probably without the nudist beach, but hopefully with all the usual fun and frolics of the British Championships, some great chess – and a real festival atmosphere.